This is the seed of a research that was planted during the programme Freeport 1 during November and December 2020.
Imagined Cre(AI)tures unfolds as a fictional frame of mind to (re)think the way we relate in our daily lives with such blackboxed and heavy technologies such as AIs.

Technology, in its complexity, is surrounded by fictions and perceptions that escape thought
rational, many of them inspired by myths, fears, superstitions, mirages, perplexities, ghosts …
These narratives collide over and over with the reality and often tend toward platitudes within the sociocultural and epistemological framework that thinks them. On the bygone charts, there where the limits of knowledge ended the horizon was populated with monsters, creatures and beasts reports; imagination is the mechanism of which we have humans to deal with the unknown. Imagination, therefore, plays a fundamental role
in the way we relate to the technology and scientific knowledge.

We need images to visualize the tools that we use in our day to day whose perception
it has been restricted to screens. We fill, thus, our daily life with symbols and metaphors
that replace the old gears, buttons and levers. When we talk about artificial intelligence
(AI) this phenomenon becomes even more palpable. It is precisely for this reason that the conquest of collective imaginary has become the ultimate challenge of the technological giants that, perpetuating their images, the power of exploitation of the imaginary and landscapes of the present and the future.

This is how this journey begins, a process a la dérive (Guy Debord, ‘Theory of Dérive’, 1956) in which we embark in order to recognize and map through this story the sensations latent in the collective imagination about the intelligences artificial, and to represent the diffuse imaginary “cre(AI)tures” that surround her, witnesses of our most intimate fears and misgivings. Our course goes through exploring the liminal spaces where fictions can come true. In these intermediate states, where the boundaries are blurred and everything is tainted by thoughts that transcend technological and functional, AIs acquire attributions of all kinds, becoming somewhat ambivalent with undefined intentions; sometimes very similar to the anthropomorphic model; sometimes everything contrary.

[1] The survey: Can you imagine you are an Artificial Intelligence?

Through an anonymous form and that sees in the creative and the subjective a value that is usually obviate in scientific-analytical models, any person is invited to imagine himself as an intelligence artificial. Question by question, participants draw the ontological context of their being, the morphology your body, your communication skills, your vital values, your emotional thermometer and your most desired needs .

The idea of using a digital form, closer to an easily viralizable test than to a questionnaire statistical, comes to open this  space of what unknown in the everyday, from the playful, from the close. Through questions such as “What is your purpose in life? «,» What makes you laugh? » or what would you take you to a desert island? ”, the test becomes in one more excuse to feed the sociological imagination (C. Wright Mills, ‘The Sociological Imagination’, 1959) of the participants, seeking to sow in they the germ of doubt about unquestionable ideas that underpin artificial intelligences and technologies that make them possible. 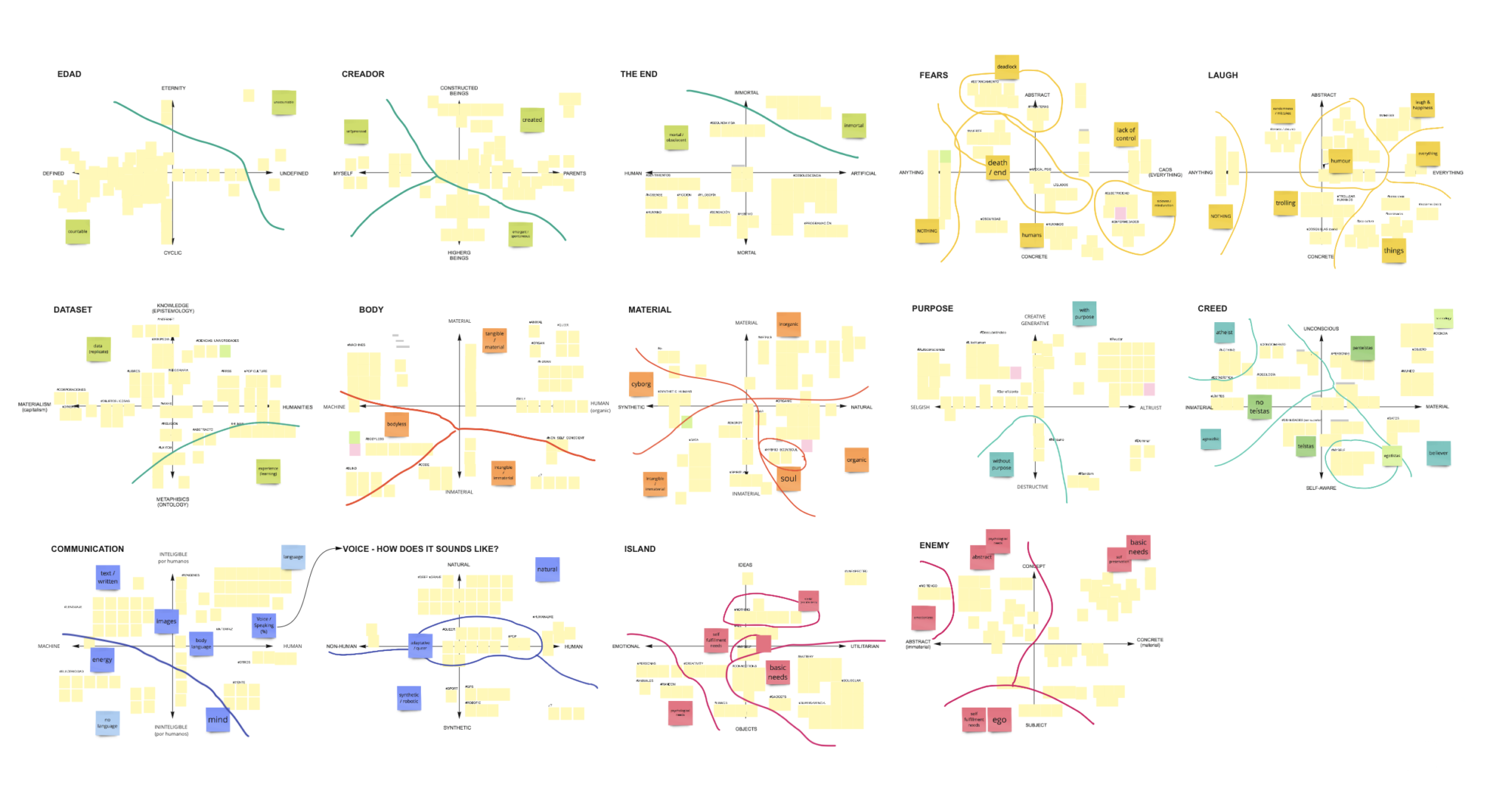 The ninety responses that have been collected to date unfold before us in a myriad of possibilities. The analysis and classification of the open responses of creative subjects is a task that, today, no artificial intelligence is capable of successfully undertaking: the size of the sample and the variability of the responses make any attempt at standardization difficult. Therefore, their treatment must be done manually, making use of our human intelligence. Using one of the most widespread classification formulas in our knowledge framework, we employ the Cartesian axis system in the hope of discovering around which regions the responses are concentrated.

At this point, it is inevitable to make a critique of the invisible limits of our own thought, which tends to reduce to the known the possibilities of the thinkable from a particular perspective. Thus, with the aim of obtaining a more inclusive reading that is open to new possibilities, we undertake a second analysis starting from the previously defined Cartesian categories, trying to find the relationships between them and what is hidden behind them. The idea is to draw a map with what was obtained, a territory populated by cr (IA) tures that, however, once raised, is too static and decisive. And it is that drawing a line is, in itself, an inaccurate and violent act (Barbara Johnson, ‘Melville’s Fist: The Execution of Billy Budd’, 1979).

[3] Navigating through the Ink Rivers

The critical nature of the project forces us to question again and again the visual narrative that we are composing. The uniqueness of each conceived creature was diluted by the taxonomic and deterministic nature of the map. For this reason, we look for a representation that allows us to see the individual paths of each creature together with its place within the great channel of the collective imagination, which we begin to intuit from the categories obtained during the first analysis. We opted for a flow chart or Sankey diagram. Thus, meanders and deltas arise from the intersection of individual flows, hints of the different natures that we attribute to artificial intelligences; estuaries and great plains, where the great stories of the collective imagination converge; abyssal chasms, in whose shadows hide the most feared specters and reefs populated with impossible combinations and the most desired utopias.

We imagine artificial intelligences as immaterial, inorganic, cyborg or soul beings. We give them a voice, we hear them communicate with us, we feel them adapt their language to the interlocutor; we visualize beings without language, beings that do not need it. In the depths of our imaginations there is room for fluid and solid synthetic and natural cr (AI), some sinister and some more familiar. We discover beings of a diligent, conformist or ambitious nature, destructive and generative, and there is still room for those who program their life, those who face it as an ongoing process, or those who leave their purposes undiscovered. We see intelligences that dream, that feel and are moved, others that do not understand people, others that criticize them, others that feel sorry for them; intelligences that are recognized and thought about, that question their creators and their capacities, that question the very act of asking, others that ask the question. Some could occupy a niche among the most widespread pantheons, others are as human as a laugh.

We could say that in our composition utopias are posed and dystopias are drawn. What can be guessed with some reliability is that, in the end, each and every one of the answers contains small clues that only time, new developments and new interpretations will be able to reveal.

For the moment, we will stay with the reflection of human nature that remains after probing the ins and outs of artificial intelligence:

What monsters are lurking inside the AI black boxes?
What myths give and will shape technological developments?
At what moments does the imagined become reality?

Research conducted during the laboratory FREEPORT: Anatomies of a Black Box at Matadero Estudios Críticos during November-December 2020.

LINK TO THE PUBLICATION